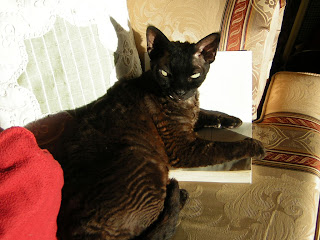 I thought my cat Smokey was a bit quiet, so I went into my lounge to see what he was doing and found him lying on the book I'm reading, looking for all the world as though he was going to begin reading it.

It was closed when I left it so he'd opened it himself.

Doesn't he look as though butter wouldn't melt? Don't you believe it - he's a little devil even though he's calmed down a lot now he's getting on in years and is a more mature gentleman - though he's still my baby.
For those of you who wondered what type of cat he is he's a Devon Rex.

The book, in case you're interested is by Bear Grylls, and is called across the frozen Ocean.

I will gladly take your Jan toddy! Sounds scrumdillyicious! Much better than my tea and honey with whiskey or brandy!