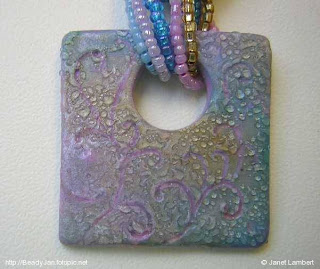 I realised I've not posted any beady stuff or jewellery I've made this month, which is unlike me.
I was sorting through some stuff I made a while ago. You know how you look at something you've made with a critical eye and think "Hmm, I'm not really too impressed with that" Then you take a fresh look at it months or even years later and think "Hey thats not bad after all"
Thats what happened with this Pendant. I was messing about with some Fimo ages ago and made this pendant by cutting a square shape and then making a big donut hole in it. I rubbed the surface of the Fimo with some Pearl-ex powders and then scraped a swirl with a pointy tool, Finally I sprinkled on some ultra thick embossing powder then baked the pendant to see what it came out like.
The utee make a raindrop effect which I thought spoilt it but looking at it with a fresh eye I think its kind of pretty.
I added several thin strands of seed beads to hang it from in toning colours.
Posted by Beadyjan at 1:03 PM

awwwwww thats so pretty i have now featured you on the inspirational blog thanks for saying yes. if you go to the blog on the left hand side theres a banner for you the (I was featured on inspirational) if you would like to add it to your blog its up to you.

have a great christmas

Crissi I'm so honoured that you think my humble blog and artwork worthy of a mention. Thankyou.

Its gorgeous. Ive been meaning to try Fimo for my card crafting, but I dont think I could do it as well as you. Id probably end up in a mess LOL!

Ohhh,,I love it very pretty,,thank you for visiting my blog..and now I have yours to look at and read also,,,have a happy holiday...
Devon