In memory of Smokey - my gorgeous cat 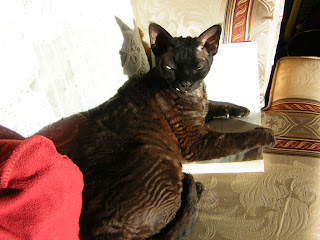 I'm afraid the worst thing imaginable has happened and last night we lost our beloved Smokey cat. I'm devastated as, even though he's been very ill, I hoped the medication helping meant he was going to improve enough to have a decent quality of life for some time.
Last evening he was asleep on the back of the sofa (one of his favourite spots) where I was sitting watching tv and he suddenly made a strange little noise, then a few seconds later I heard him moving and thought he was going to come on my knee as usual, but he just fell off the back of the sofa and I managed to catch him, he was shaking and I thought he'd just gone a bit wobbly again so I put him on the floor and he fell over and then began to stagger about and fall into the coffee table and banging into stuff it was terribly scary to watch.
So I scooped him up and held him and could tell he was having or had just had a seizure his eyes were rolling around and one was bulging a bit while the other was sunk right back and he was shaking and his back legs were rigid.
I cuddled him for a few minutes and when he didn't get any better we got his basket and we put him in to stop him trying to move and hurting himself.

We dashed over to the emergency vet but knew there was nothing he'd be able to do except stop things before he suffered too much. If we'd even waited overnight he'd have been scared and we couldn't have left him as he couldn't stand up and he'd have fallen and hurt himself even worse.
It was one of the hardest things thats ever happened and I am completely distraught, I know he was a pet but he was also my furry baby and I loved him SOO much it hurts.
At least, after the first episode he came home and spent a couple of weeks of love and cuddles being even more pampered and spoilt than usual and in a way we said goodbye properly and had a bit of time to get used to the idea that he may not get better.
I'm going to miss him SO much as we've had him since we moved into this house over 10 years ago and with me not working I'm used to having him around all day when I'm at home alone.

Rest in peace my little Smokey - if ever a pet was adored you were and I'll never forget you.
Posted by Beadyjan at 11:20 AM

I am so sorry about Smokey. I lost my dear cat Kody less than one month ago. He was my dearest buddy. My deepest condolences to you. These little guys are our best friends who love us unconditionally. Sending comforting thoughts....

Oh, I'm so sorry about Smokey. I know how much it hurts to lose a precious little member of your family. Give yourself time to grieve. Always remember how special he was in your life, and how his suffering is over now.

Once Upon A Blue Crow said...

Bless your heart. So sorry to hear about Smokey.

Ahhh I'm so sorry for your loss. It is painful when pets pass away. I know how much it hurt when our Golden Retriever Sam passed on. At least he was a loved and cared for animal who must have enjoyed his life.

sorry to hear about Smokey Jan , he'll be leaving such a big gap in your life.
You'll know in your heart that he had the best life possible being with you both and may be later you will be able to make an album about him with all your happy memories.
lots of hugs